"I Told You the Answer Was Potato!" a Recap of Harry Potter Day at Disneyland 2013

(If video does not appear in frame above click HERE.)

Here, at last, is a detailed recap of how this groovy mystery was solved. 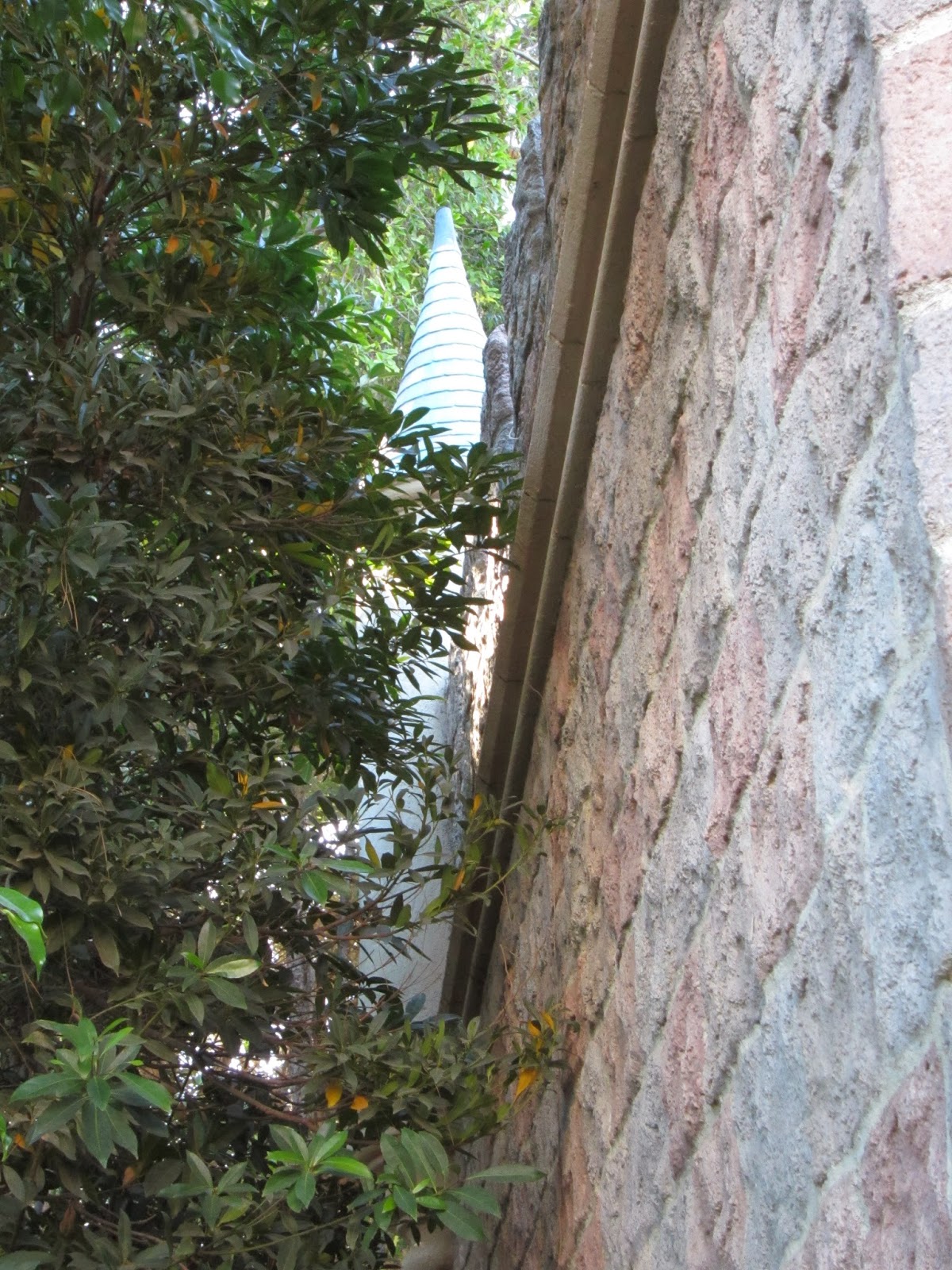 It all began when the legendary Lost Turret of Yensid's Castle was discovered. Inside this half-century old time capsule were many magical artifacts, among them them something truly unique: The Papyric Pensieve of R. S. Yensid. The school's Headmaster had experimentally embedded his recollections not in a conventional basin, but in an enchanted tome that encoded these memories as a narrative. It was hoped that these memories might serve as a clue to solving a very old mystery... Over a century ago, first year students were conveyed onto campus by an array of flying buckets which were mysteriously destroyed in 1908. Distressingly, upon inspecting memories in the pensieve relating to these events, the Yensid's Archivists found evidence of tampering. Someone had been altering the memories for some reason, and only the Faculty would have had access and opportunity to do so.

It was therefore up to the students of Yensid's to determine who had altered the memories, and why.

It is not necessary at all to review the individual clues (i.e. pensieve memories) but if one is so inclined, here they are...

Clues I Through XI

Incongruities, geographical inconsistencies and mismatching details indicated that only clues 1, 9 and 11 were true, unaltered, and contained reliable information.

Clue 1 established that ragamuffin Fergus O'Flaherty's family derived from Abbeydorney (clearly in Ireland) and that Yensid spent much time in the past in the court of King Brian of Knocknasheega. O'Flaherty's ilk told and still tell stories of the old country. They once lived there, and now they live in California.

Clue 9 finds Takeri Rickett and Ryder Grizcom at the scene of the crime, but doesn't show evidence of Rickett having caused the buckets' destruction, it merely shows Grizcom accusing her of the act and her taunting him. The animosity between these two Founders is well-seated, as indicated in this clue and other materials pertaining to their past. Rickett makes a contemptuous departure, leaving Grizcom in an ignominious huff, but does not confess.

Clue 11 has Rickett imbibing veritaserum before stating her innocence. She does admit that she is insuring that Grizcom's crop, the orange, will disappear from its eponymous county in one hundred years, which Yensid reproves her for, but she redresses this criticism by pointing out that Yensid's treatment of King Brian's favorite crop was far more severe upon his departure from Knocknasheega.

As history tells us, the Irish Potato Famine caused as many as 2 million to leave their home for the Americas in the mid-19th century. The timeline strongly suggests that O'Flaherty's clan would have had to find a new home in the States as a direct result of Yensid's falling out with King Brian.

But how, one must ask, would one possibly determine that it was Seamus Finnegan who was behind all of this? The answer is that one could not derive so specific a culprit. However...

Hand-written scribbled notes on Clue 3 included the ingredients for polyjuice potion, suggesting that the person tampering with these notes may have felt compelled to impersonate someone for some reason.

The clincher - the crux of the whole mystery - lay in a small clue that most teams overlooked. The inside back cover of everyone's student packet consisted of a series of a bulletins and announcements. One particular announcement in the bottom-right corner stated that culinary instructor Viktor Krum had recently added a cooking course called "Emerald Cuisine" in which "coddle, boxty, barmbrack, colcannon, drisheen, crubeens" and such will be taught; all traditional Irish dishes. 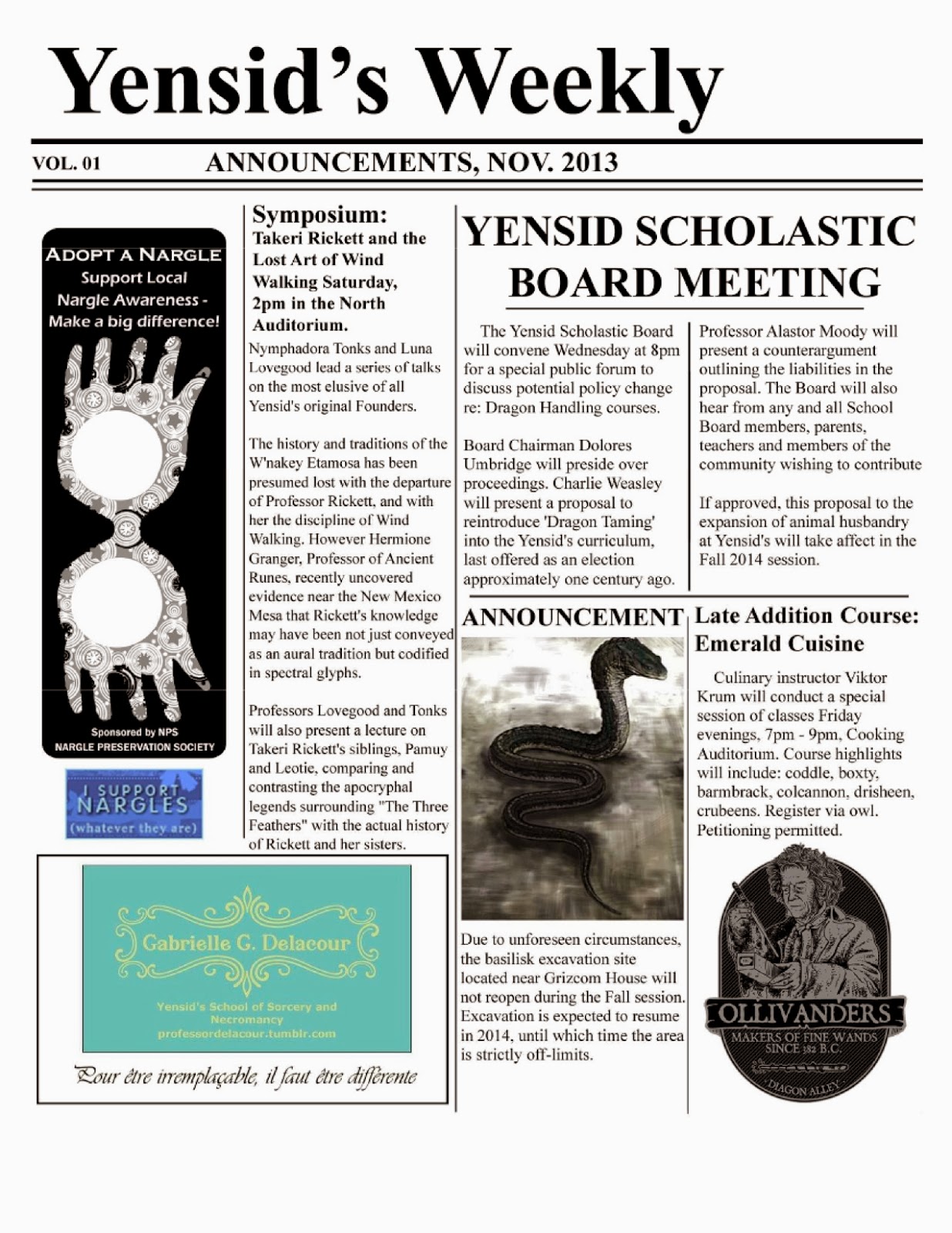 So then, why would Bulgarian Viktor Krum choose to add a late addition course in which traditional Irish foods were the curriculum? Perhaps because the discovery of the Lost Turret and Yensid's Pensieve attracted the attention of someone who feared that evidence of their family's complicity in an act of destruction might come to light? Perhaps because Krum had been imprisoned in the very same tower and forced to tear a page out of the history of Dashwood's 'Life and Times' and write a plea for help and food and cast it out the window as a paper airplane because someone using polyjuice was impersonating him?

Naturally, most teams didn't take notice of this clue because they were focused on a red herring involving Charlie Weasley and the potential reintroduction of Dragon Husbandry into the curriculum. There were seven different red herrings, and most teams latched onto the one pertaining to Charley Weasley - not irrationally, as this particular item took a very large portion of the page of bulletins.

But wasn't O'Flaherty given an alibi by virtue of being with Professor Halward in the Muggle Studies Laboratory for most of the night, as she said? As Clue 8 was proven to be false, no. And since there was but one Irish person in the narrative in the untampered clues, it can only be determined that they corresponded to the one clue pertaining to Irish matters within a page otherwise filled with red herrings... the clue that existed by virtue of actions taken by Viktor Krum.

At least one team, by virtue of their notes, indicated that they determined that at one point Professor Binns mistakenly referred to Seamus Finnegan as O'Flaherty, who in the mythology of Yensid's would be his mother's maiden name. No one was expected to figure this out, of course, but we were nonetheless tickled that at least one team made the connection. The teams who derived the correct answer were relying only on the connection between O'Flaherty, Yensid, the Potato Blight, and Krum's course in Irish cuisine.

Granted, this was the most difficult of any puzzles put to the students of Yensid's, and no mystery put to them will ever be as difficult as this...

But, in all fairness, Scorpius did tell you that the answer was potato.
Posted by Zoe at 11:00 AM