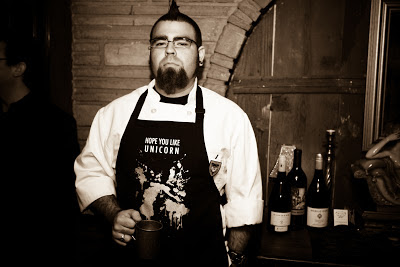 So Cal Wizarding Weekend began with the traditional Dashwood House Dinner, held at the Cellar in Fullerton. The students enjoyed participating in the Faculty's start of term bacchanalian revelry. Classes were about to resume at Yensid's School of Sorcery and Necromancy. Things were off to a rosy start.

And then something went horribly wrong.

A perimeter protection spell was triggered - someone had trespassed into Yensid's Chamber of Mysteries and made off with an unknown object. Later, a Dark Mark appeared over Yensid's personal bungalow. 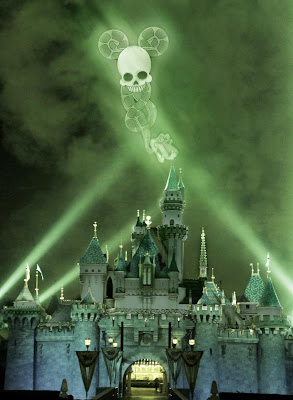 Finally, an unknown dark presence bewitched all the students' course materials to convey a warning of impending doom come Sunday evening. Who this malevolent entity was or how they were accomplishing these heinous deeds remained unclear; they hinted only that one of the Faculty had become their unwitting accomplice.

The students were allowed only six hours to gather clues and decipher who was behind this chicanery - otherwise they would remain unstoppable and the school destroyed. 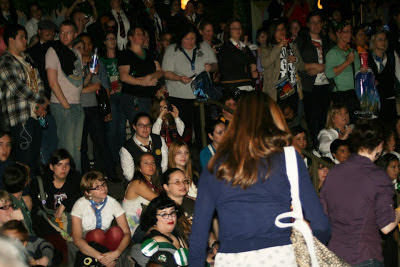 The students of all four Houses - Grizcom, Dashwood, Rickett and Willowdell - gathered together to present the Faculty with their findings. The school's Chancellor began by addressing the crowd...

"It's time now to find out who is behind these dark - "

"I didn't do it!" protested Professor Gabrielle Delacour, recently released from Disney Gaol for the birdslaughter of Tiki Room performer Rosita. 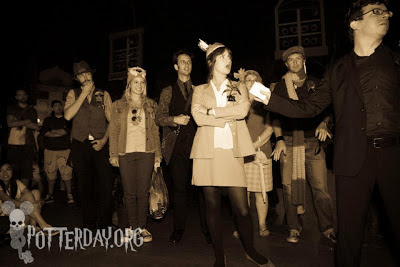 "I have to put it to the students," the Chancellor continued, "so, what dark wizard is responsible for all this?"

"Karkaroff!" the students answered in unity.

"Karkaroff was killed in 1996," replied the Chancellor, confused.

"Ah, but what if he is transferring soul before he is killed?" offered Professor Krum, piquing the suspicion of the rest of the Faculty.

"Well then, what form of magic is Karkaroff using to transfer his soul?" asked the Chancellor.

"A horcrux!" answered the students.

"Then which member of the Faculty is this horcrux controlling?" 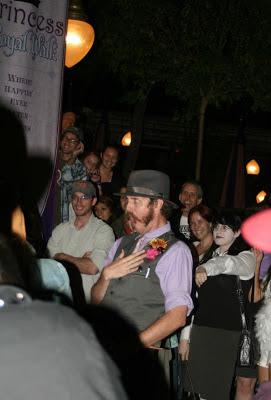 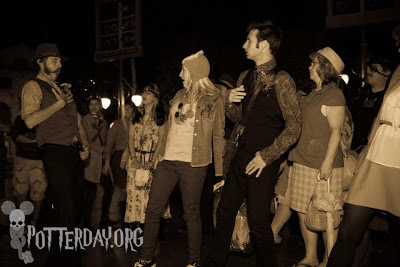 "Well then, what was the horcrux?" wondered Professor Tonks.

Reanimated Professor Bartemius Crouch Junior reached into his pocket and produced a peculiar wand with a glowing tip he later described as some sort of screwdriver and pointed it at Lockhart's hat. 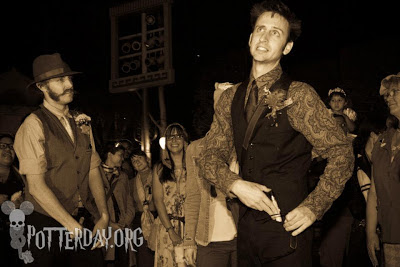 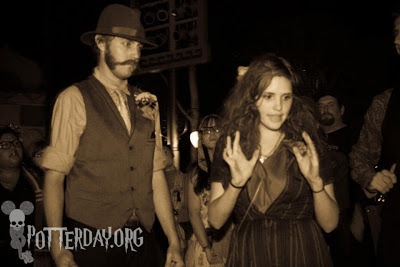 "Of course!" cried Professor Granger. "Karkaroff created a horcrux using R. S. Yensid's favorite hat before he was killed, which was placed in the Chamber of Mysteries. Then Lockhart took it for its aesthetic value alone, not knowing it was a horcrux!"

This was too much for Professor Malfoy, who began prancing about stating "I'm Hermione Granger! I'm a mudblood who makes up for it by being an insufferable know-it-all!!" 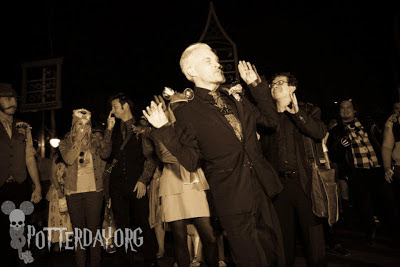 Tonks restrained Granger from assaulting Malfoy and tried to return to the topic at hand: "So is that why he's been growing out that ridiculous moustache?"

"THERE IS NOTHING RIDICULOUS ABOUT MY MOUSTACHE!!" bellowed Lockhart in a suddenly Bulgarian accent. "It is Yensid's that is ridiculous! Yensid's is more ridiculous than Hogwarts! Everyone knows Durmstrang is best school! DURMSTRANG!" 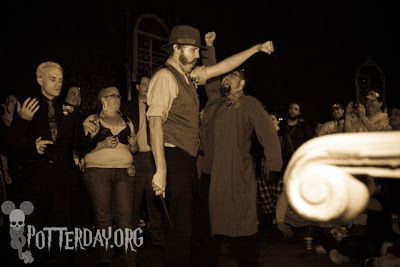 Karkaroff continued using Lockhart as a meat puppet: "Yensid's is travesty of school! It is - "

But then Professor Lovegood stepped forward and removed the cursed hat from Lockhart's head. He looked around as if awoken from slumber, confused, and asked "... do you all live here?"

An all-too amused Malfoy indicated that his father would definitely hear about this.

Professor Lovegood suggested that the accursed hat belonged in a museum, but was instructed to place it back in Yensid's Chamber of Mysteries where it would never pose a threat to anyone ever again. 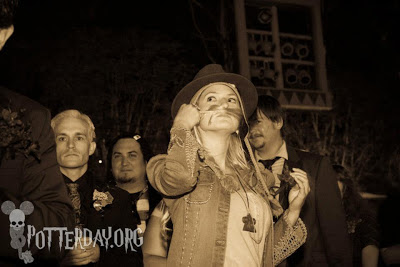 The crisis and threat averted, it was now time to award prizes to the cleverest of students who helped us avert disaster and bestow the coveted House Cup.

This year, the title of Magic Kingdom Champions was awarded to "The Totally Awesome Supermegafoxyawesomehot Cornish Pixies of Doom" of Grizcom House. 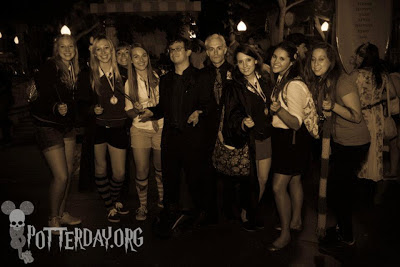 And the esteem of the House Cup this year went to... Dashwood House! 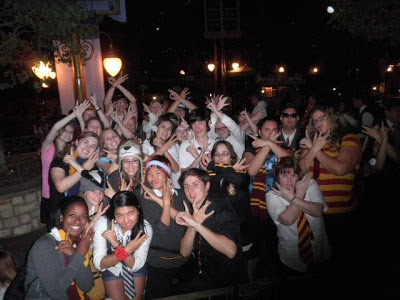 Here they can be seen displaying what, in Muggle parlance, is referred to as a 'gang sign.'

Happily, the students of all four Houses have formed their own social media pages - click on the names to join either Rickett, Grizcom, Dashwood or Willowdell's pages. (And be sure to get it together for this year, Rickett and Grizcom.)

Naturally, there are countless persons who contributed their time, effort and finances into pulling this year together, but one who stands out for her contributions is our Helena Ravenclaw. I would list and display all the stunning materials she assembled for us, such as the First Year students' certificates, but this website hasn't the space. I'll just display, for your envious enjoyment, the scarf she made for the Chancellor using all the Yensid's House colors. It's good to be the Chancellor. 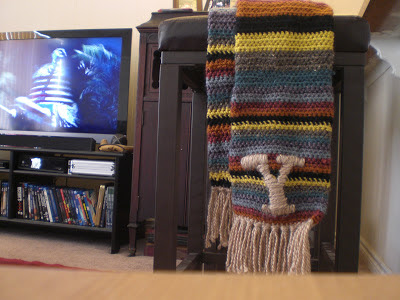 Anyway, we can't wait to see you all on November 3rd for the 7th annual (unofficial) Harry Potter Day at Disneyland! 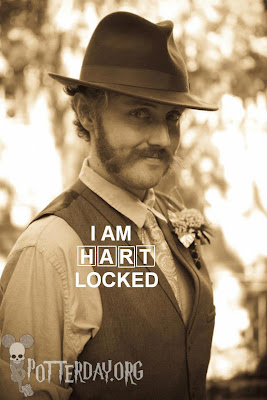